Noah Smith asks about the literature on the real exchange rate (RER) and trade.

My own main line of research is about RERs and manufacturing (also here on workers), RER measurement, and I've also done work on the impact of currency unions on trade, or lack thereof.

The first and third of these papers does include a bit on trade, although in neither case is it the focus. The third paper shows that the class of Weighted-Average Relative (WAR) exchange rates does a better job predicting US trade balances than do traditional indices. The difference is largely that the WAR indices reflect the impact of increased trade with the People's Republic of China. (In truth, the WARP index was first discovered by Thomas, Fahle, and Marquez in a very under-rated paper...) 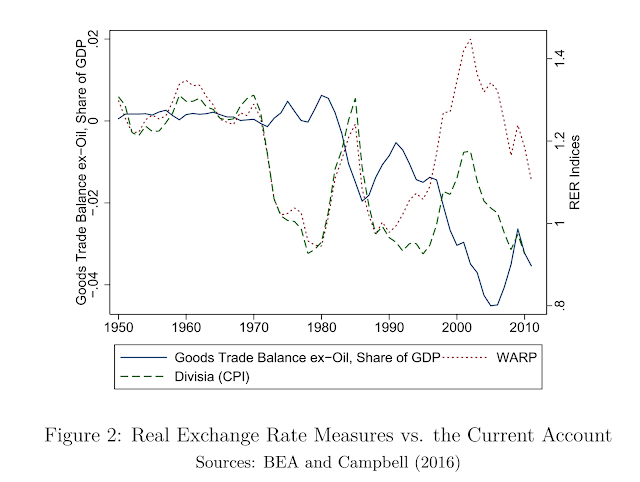 I've also looked recently while prepping for class on a good paper on RERs and trade. In truth, the answer is that I also couldn't really find good, modern work that takes identification seriously (if you know of some, please add in the comments. Actually, when I began working on RERs and manufacturing employment, I could see that this literature had already become quite dated. Results were mixed, the best paper was still before the era in which standard errors were clustered in one direction much less two, each paper implied something different (of the four most recent using US data, one said RERs had only a small impact, a second said the impact depended on the specification, and a third said it had none, and a fourth said it was large), and the literature seemed to me in need of a modern treatment. However, I got a lot of pushback from the first time I presented this paper that the topic had "already been done". I think part of this stems from a certain gullability, and over-confidence among certain economists in their profession. If a paper is published in a good journal, then that's the end of the story. It must be true. Even if the paper was from 1991, and the results came from 600 data points and included few controls, and barely any robustness. In truth, I suspect that probably more than half of published research is straight wrong. In addition, much of what is "right" might offer incomplete evidence, or still has plenty of room for improvement. A perfect paper probably does not exist, and so I see papers that subject already published research results to new tests as being helpful, and quite worthy of publication in top field journals. (This is almost certainly a minority opinion...)

One thing I probably overlooked is simply that the literature on RERs and trade isn't that great. I'm still contemplating doing a paper on this, although I'm sure I'd have a lot of similar pushback. ("This result is not new.") The big issue in this literature is identification. In theory, the correlation between the RER and trade could go in either direction. That's because something like the Asian Financial Crisis could cripple the industrial (tradable) sector and also lead to a severe currency depreciation. Thus, the raw correlation between trade and the RER could be negative, positive, or zero in the aggregate. I haven't seen anyone really try to solve the identification problem here. (Well, OK, there was an economic history paper that looked at countries which pegged to gold vs. silver, and then what happened when the price of gold to silver changes, but what it seemed to me to miss was that this also had implications for monetary policy, and so wasn't quite exogenous.)

In any case, the end conclusion is that this is very much a literature in need of improvement.