Did the Rise of China Help or Harm the US? Let's not forget Basic Macro

This is a question which was posed to me after I presented last week at the Federal Reserve Board in DC. Presenting there was an honor for me, and I got a lot of sharp feedback. It's also getting to the point where I need to start thinking about my upcoming AEA presentation alongside David Autor and Peter Schott, two titans in this field who both deserve a lot of credit for helping to bring careful identification to empirical international trade, and for challenging dogma. After all, before 2011, as far as I know the cause of the "Surprisingly Swift" decline in US manufacturing employment had not been written about in any academic papers. This was despite the fact that the collapse was mostly complete by 2004, and was intuitive to many since it coincided with a large structural trade deficit. (Try to explain that one with your productivity boom and slow demand growth, Robert Lawrence...)

On one hand, there is now mounting evidence that the rise of Chinese manufacturing harmed US sectors which compete with China. This probably also hurt some individual communities and people pretty badly, and might also have triggered an out-migration in those communities. On the other hand, typically the Fed offsets a shock to one set of industries with lower interest rates helping others, while consumers everywhere have benefited from cheaper Chinese goods. Which of these is larger? I can't say I'm sure, but of these shocks mentioned so far, I would probably give a slight edge to the benefit of lower prices and varieties. However, I suspect, even more importantly, Chinese firms have also been innovating, more than they would have absent trade, which means the dynamic gains in the long-run have the potential to be larger than any of these static gains/losses you might try to estimate courageously with a model.

Many (free!) trade economists use the above logic (perhaps minus the dynamic part), and conclude that no policies are needed to help US manufacturing right now.  However, I think this view misses 4 other inter-related points, and in addition does not sound to me like a winning policy strategy for the Democrats in 2020. And a losing strategy here means more Trumpian protectionism.

First, when a trade economists' free trade priors lead them to argue that the rise of China was beneficial for the US, they forget that China and the US do not and did not have free trade between them. Just ask Mark Zuckerberg. Or google, or Siemens, or the numerous other companies who have had their intellectual property stolen. (Of course, the Bernie folks also need to remember that it is probably rich Americans who have been hit the worst by China's protectionism -- IP piracy certainly harms Hollywood and Silicon Valley, probably quite badly, while Mark Zuckerberg may be the most harmed individual).  It might be that the rise of China was beneficial to the US, but would have been even more beneficial had China not had a massively undervalued exchange rate for much of the past 30 years. If you disagree with this assessment, then you, like Donald Trump, are not exactly carrying the torch of free trade. (What's wrong with having the market set prices, tavarish?)

Another problem with the view that everything is A-OK in trade is that China's surpluses are now reduced, but reduced due to a huge reduction in demand and growth in the US and Europe. That's not a good way to solve imbalances. See diagram below, drawn on assumption that the exchange rate is held fixed: A shift down in US demand (increase in Savings, SI shifts right) left income depressed, but improved the trade balance from CA0 to CA1. However, if US demand increases/savings decline, the US won't go back to the Full Income/Employment and CA(balanced) equilibrium. For that, we'll still need to devalue the exchange rate (shifting up the XM line with a devaluation, it shifts down with an appreciation). As they say, it takes a lot of Harberger triangles to plug an Okun Gap. 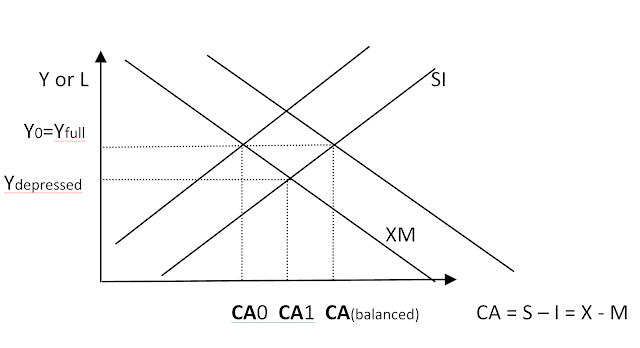 Sure, you might object that it is less obvious that China is overvalued now. You might have heard stories about capital wanting to flood out of China, not in. But, this is because the exchange rate is set largely by capital flows and not by the structural trade balance. All this indicates is that monetary policy is relative tight in the US/Europe, not that the structural trade balance is in equilibrium. It isn't.

The third factor that most economists neglect when they think about the rise of China is the issue of hysteresis, defined weakly as "history matters". Clearly, being overvalued for an extended period of time will shrink your tradables sector. Yes, it can also decrease your exchange rate, but it will for sure decrease the equilibrium exchange rate you need to balance your trade. And if your exchange rate is being set in Beijing, or by the ZLB, then you can forget about a quick return to normality.

The chart below shows that US dollar appreciations are followed by a shift up in the relation between the US trade balance and the RER. Undervalued periods (just 1979) is followed by a shift to the southwest. Thus, shifts NWs are shifts in the direction of a shrinking (in relative terms) US tradables sector/income. The trade balance itself won't be hysteretic, as movements NW reduce imports, but the intercept of the exchange rate/trade balance slope will be. 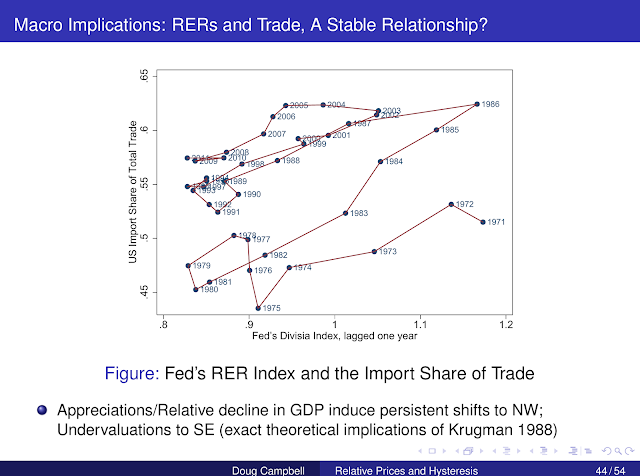 To put hysteresis another way, consider the event study diagram below of the 1980s US dollar appreciation (from my paper here). The dollar appreciated 50% (black), and as a result, employment in the more tradable sectors (blue dotted line) fell about 10% relative to the more closed sectors (red line). The interesting thing, though, is that after relative prices returned to fundamentals, employment in the more open sectors came back only slowly, if at all. 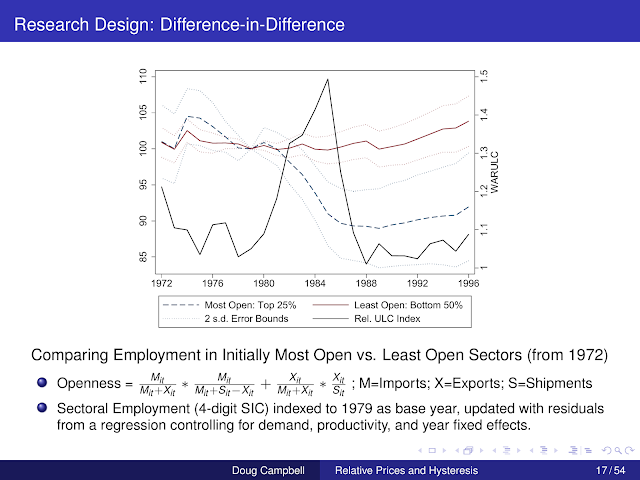 The above makes clear that a temporary shock has a persistent impact. But, could it actually lower income? Well, imagine for a second what would happen if the US dollar were very overvalued for a long period of time, say, due to policy. Eventually, it would lose all of its tradable sectors. Then, what would happen to income and the exchange rate when it floated again? Would things go back to normal overnight? Or would it take some time to build up the tradable sector capacity back to where it used to be? In the meantime, you would be likely to have a vastly lower exchange rate, which means you can afford less, which means you are poorer. Also, in an inflation-targeting regime, if a period of overvaluation coincides with a recession, and you shoot for just 2% coming out, then you might never recover your hysteretic tradable-sector losses. Thus, it isn't that free trade is bad, but having an artificially overvalued exchange rate is.

Wait, there's more. You might be thinking -- is there really a Macro effect of a trade shock? Won't the Fed just offset a trade shock by lowering interest rates? In that case, won't a trade shock just alter what gets produced and not how much is produced? For a small shock, the answer is probably yes. But, for a large shock that pushes you close to the zero lower bound, like the 2000-2001 shock did, there is no guarantee. The Fed likely would have responded more aggressively to the 2001 recession if not for the ZLB. Secondly, lower interest rates from the Fed work in part through exchange rate adjustment. If the ZLB comes into play, the exchange rate will be over-appreciated relative to what it needs to be for a full-employment equilibrium. This may imply more tradable-sector job losses. And, if China is pegged to the US, that adjustment won't happen. And, as my students can all tell you, monetary policy becomes ineffective with a fixed exchange rate and open capital market. Sure, the US had a floating rate, but being pegged by China, and essentially by other East Asian economies following the Asian Financial Crisis, leaves you with much the same result.

So, am I then proposing Trumpian protectionist policies? Not necessarily. You see, while US growth is still slow, the US is not at the ZLB any more. The Fed can cut interest rates, and spur growth and weaken the dollar, helping manufacturing. The beauty of this strategy is that it solves multiple problems at once. And, there are certainly specific trade issues that the US could raise with China, in addition to exchange rates. It would, of course, be strange to push on the issue of exchange rates while US interest rates are too high. A higher inflation target would also be a passive way of discouraging China from holding so many dollar reserves. But, I think a possible winning political strategy would be a high nominal GDP target, which will also weaken the dollar, and also campaign on a push to defend US corporate interests in China on specific trade issues, including the exchange rate.