Ancestry and Development: the Power Pose of Economics?

I was fortunate to be invited to present at George Mason this week. I was very impressed with the lively atmosphere of brilliant scholars. George Mason certainly has had an outsized impact on the economics community, and also likely on economic policy in the US given its admirable commitment to participating in the public dialogue.

In any case, they asked me to present my work joint with Ju Hyun Pyun, taking down the "genetic distance to the US predicts development" research, which Andrew Gelman blogged about here.

It was the first time I had thought about this research in some time. This has evolved into an Amy Cuddy "Power Pose" situation, in which Spolaore and Wacziarg refuse to admit that there is any problem with their research, and continue to run income-level regressions and write papers using genetic distance which do not include a dummy for sub-Saharan Africa, but exclude that region instead. (For example, they have a paper dated September 2017, "Ancestry and Development: New Evidence", which continues to exclude SSA. Surprise, surprise, they continue not to cite us. Note that here, both I and they are really talking about genetic distance, not ancestry generally...)

In their comments over at Gelman's blog, they also stressed that "our results hold when we exclude Sub-Saharan Africa and so cannot be driven solely by those countries". 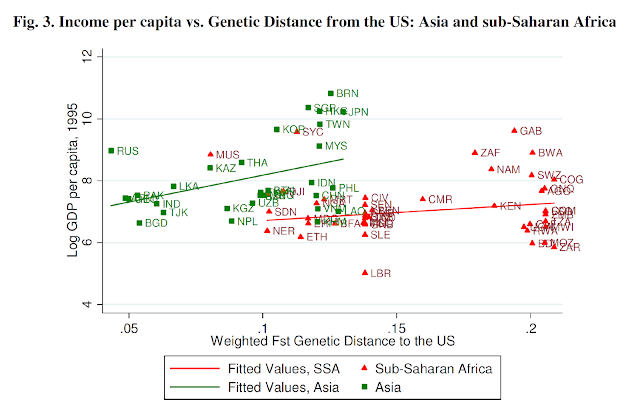 Another reason to be skeptical is that if we exclude sub-Saharan Africa and Europe, there is also not significant correlation, although, to be fair to these guys, the sign is correct. 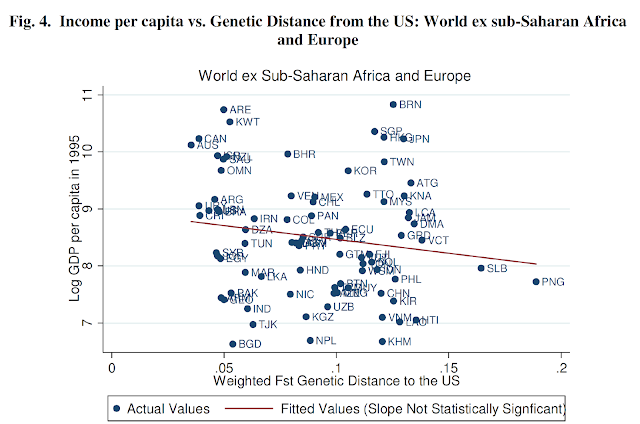 Thus, the remaining question is how robust the genetic distance-development relationship is in Europe. In fact, there is already a paper, by Giuliano,Spilimbergo, and Tonon, saying that the impact of genetic distance on both trade and GDP in Europe is not robust. Note, the early drafts of that paper also said something about GDP in Europe, while the published version stripped out GDP precisely because the referees -- likely Spolaore or Wacziarg -- wouldn't allow it.

I also went back to look at what my referees had said about this paper. Wacziarg has now posted regressions on his website used by this referee, so I gather that he must be the author. Interestingly, Romain had some very choice words for this paper, even though Paula Giuliano is a colleague: “Regarding the paper by Giuliano, Spilimbergo and Tonon, the authors of this paper are clearly referring to an old (2006) version, which contained numerous errors and imprecisions.”

I'm curious, Romain, if you're out there, what kind of "errors and imprecisions" this paper by your colleague had.


In any case, I decided to check if Giuliano, Spilimbergo, and Tonon were really that careless, or whether Spolaore and Wacziarg were, once again, wrong.

Thus, on the metro ride from Dupont Circle to George Mason, I fired up Stata to check how robust the results were when we exclude sub-Saharan Africa. Admittedly, it took me several regressions (see below) to get this correlation to disappear. The key control was a dummy for former communist countries, or controlling for Eastern and Western Europe separately. In each of the regressions below, I've excluded sub-Saharan Africa. In column (1), I include controls for absolute latitude and a dummy for Europe. In column (2), I include a dummy for Western Europe instead (excluding former communist countries). In column (3), I include dummies for former Soviet Union countries (FSU) separately, and, unfortunately, the results are no longer significant at 95%. In column (5), I also add in "Percentage of land area in the tropics and subtropics", and now the coefficient on genetic distance falls to -3.7, but with standard errors of 3.6.

Hence, it would seem that genetic distance to the US is not a good predictor of income levels, even if you exclude SSA, which are counter-examples. Only caveat here is that I spent about 30 minutes coding this up while extremely jet-lagged. 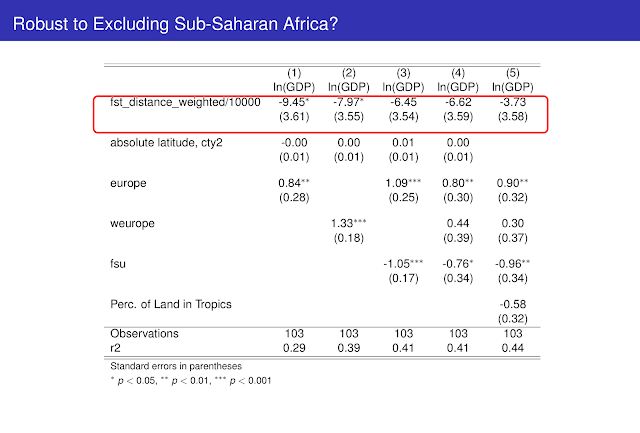 It's amazing to me that these two Harvard PhDs would want to continue to push this, and to stake their reputations on this. To me, there are a lot of ways I would like to spend both my research time, and my free time. Even if I was them, I don't see why continuing with this project appeals to them so much. They now have written an additional 5-6 papers, it seems, repeating the same mistakes, even after they became aware that their results are not robust. The answer must be that now they perceive themselves to be in a life-or-death situation in which their reputations are at stake. They really need this correlation they discovered to be robust. And so they continue to churn out papers using this measure. In fact, I suspect no one really cares. That's why it's surprising they haven't moved on.

Another thing which is strange about their new paper, is that in the comments over at Gelman, they said that their paper was mainly about the country-difference pair regressions. I showed that these results, too, are not robust once one separates out poor sub-Saharan Africa from richer North Africa, and includes a full set of continent fixed effects. I should add that Spolaore and Wacziarg claim that when they run these same regressions, their results are robust. However, they won't provide us with their data or regressions to check. Nevertheless, in their new paper, they've gone back to the cross-country income regressions, which they previously conceded were not robust. I guess they were hoping that their comments over at Gelman's blog (and at Marginal Revolution) would be forgotten.

In any case, if Spolaore and Wacziarg want to respond with more gibberish, I'll yield to them the floor. I do wonder what kind of evidence they would want to see that would convince them that there is nothing here. Figures (3) and (4) are already pretty damning, not to mention the table after it. I'm sure they'll continue to be as defiant as ever, which should provide some comic relief for the rest of us.

Update: I have put in another request to Wacziarg and Spolaore for their data. I wouldn't hold your breath. I'd be willing to bet my life savings that they will not provide their data and code. They do provide their new genetic distance data, presumably so that other people can use it and cite them. I downloaded this data to test robustness. Stay tuned for results!

Update 2: Someone writes in, directing me to a link to the debunked genopolitics work on whether there is a "voting gene".
Posted by Doug Campbell at 4:20 AM