A Quick Argument Why Not to Raise Interest Rates

I teach today, so this will be quick. Why am I opposed to raising interest rates?

First, I should mention this is a debate which we've had before. When the Fed decided to leave it's balance sheet unchanged for all of 2009 and 2010 -- while the economy burned -- I thought it was a mistake. When Ben Bernanke raised the discount rate in 2010, I wondered if he had lost his marbles. The result was a 63 seat loss in the House for the Dems and a full decade of Tea-Baggers in the Congress (and maybe more, depending to what extent gerrymandering affects local House elections which will then affect the next redistricting). Given that the economy continued to grow slowly after that, I think I was justified.

Next, after QE2 at the end of 2010, I believed the Fed should have acted sooner than the end of 2012 for QE3, given the fact that growth was slower than it anticipated.

Then, I thought 2014 was too soon to taper, given that inflation was below target and GDP growth was below trend.

At the end of 2015, I also, not suprisingly, thought it was too soon to tighten. Once again, 2016 was a year of slow GDP growth and below-target inflation. So, in retrospect, I think that was the right call. The last two rate hikes, I believe, are also premature. Unemployment is now super low, and employment gains the past several months indeed look solid. Thus it isn't crazy to hike now. But the unemployment rate and current headline inflation rates are not the only numbers the Fed should be looking at. The Core PCE is still pretty stable, below 1.8% for the last reading, and while headline inflation is now close to 2% and will soon likely move higher if current trends continue, this measure was also close to zero as recently as 2015, a year in which the Fed actually raised interest rates. The Fed shouldn't ignore that inflation has been below it's target for most of the period since 2008, that the employment-to-population ratio for prime-aged workers, while trending in the right direction, still has a lot of room to recover, and that RGDP is some 20-25% below it's long-run trend. Given that inflation has been below target for so long, why not let inflation run above target for awhile to allow GDP to catch up with its previous trend?

And, add to this that our inflation target is too low. Clearly, the Fed has trouble managing the economy at the zero lower bound. A 2% inflation target means that any large shock will push us into a liquidity trap. This seems more-or-less obvious. Why not raise the target to 3%?

The only silver lining here for Democrats is that this hurts Trump and Republicans. But they've been pushing the Fed for tighter policy for years. One wonders if they will soon start to change their tune. 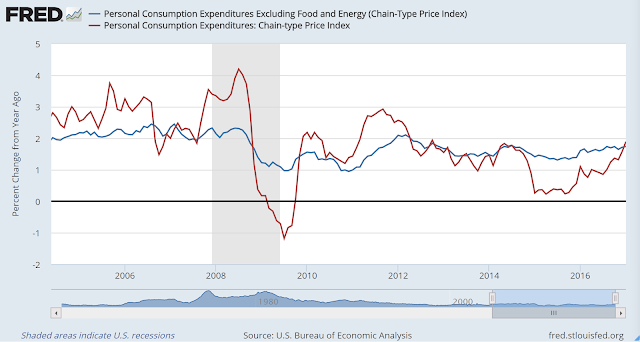 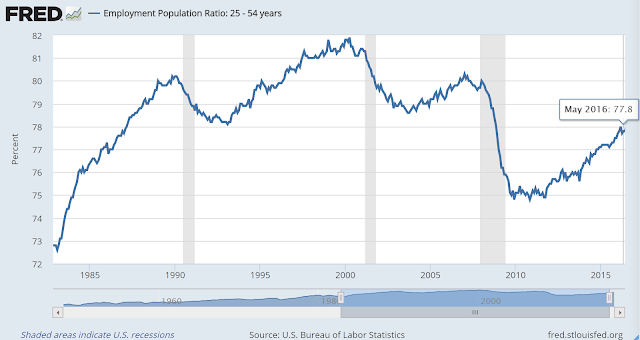 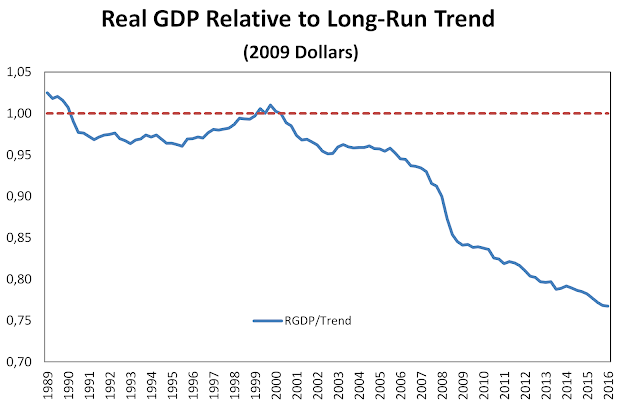 Posted by Doug Campbell at 9:06 PM