My answer is yes they are.

I recently assigned my students to write a referee report of Eggertsson et al., "Are Negative Nominal Rates Expansionary?" I chose the paper because I'm a huge fan of Eggertsson's work, the paper is well done, it has a nice synthesis of data and theory, and the topic is of central policy importance. The authors find that negative nominal interest rates may not be expansionary, and also, that under certain conditions, quite surprisingly, they may be contractionary.

I like the paper and see a clear contribution. However, I wish the authors would have framed the paper slightly differently. My reading is that they show that negative reserve rates below the cost of hoarding cash can be potentially contractionary under some conditions, and need other policies (negative lending rates for banks/Gesell taxes) to make the policy more expansionary. This is still an important and useful point -- I learned something from them. Yet, since not all of the key modeling assumptions are true, and since "negative interest rates" can include 1. negative rates above the cost of hoarding cash, 2. negative borrowing rates for banks, or 3. Gesell taxes on banks (may seem far-fetched, but something in this spirit has, in fact, happened), I think the paper's actual result is in fact narrower than "negative rates aren't expansionary and may be contractionary", and does not apply to the negative interest rates that we have seen.

One concern is that the ECB also had a program (dubbed TLRTO -- can't central banks print some money and hire better PR people?) where banks could borrow money at negative interest rates on the condition they lend it out. In that case, hundreds of billions of Euros in loans were taken out, likely many as a cause of the policy, and these "negative interest rates" would also add several billion Euros directly to bank profits over the last few years. The model in the paper does not consider this possibility.

Two additional key assumptions of the model are that banks are taking out 100% financing from deposits (as many of my students noted) and all bank profits are paid to households. To their credit, the authors fully acknowledge that the first of these assumptions is important and not exactly true. In Sweden, for example, the deposit share is less than 50%. To the extent that financing comes from other sources, banks may actually care about the spread between the reserve rate and the loan rate, particularly if there is a cost of holding cash (say, 1-1.5%). In practice, after the financial crisis, banks like Bank of America cut their dividend payments to almost nothing. In this environment, banks will respond to negative interest rates by making more loans and lowering the interest rate on loans, and may even pay more dividends, boosting aggregate demand. Nothing in the paper contradicts this logic.

My intuition before reading this paper is that a negative interest rate will be an effective tax on excess reserves, and thus it would make a bank want to lend out money instead of having more reserves. This appears not to happen in the model because banks would hoard physical cash instead of reserves (I think the authors could have been more explicit on what banks do with their mountain of excess reserves when negative rates happen -- the calibration exercise starts with few excess reserves).  There is an implicit assumption that because deposit rates didn't drop (much) below zero, that the cost of holding cash must also be close to zero, and also, in particular, lower than the .4-.7% negative interest rates that we've seen. My gut feeling is that the level is likely to be closer to 1-1.5%, since banks did not, in fact, hoard physical cash. One reason they did not, however, is that central banks aren't stupid -- it seems at least some central banks take into account changes in cash holdings of banks when setting the limits for negative-interest free reserves (see box 2 of this BIS document on negative rates). In addition, there is a paper arguing banks responded to negative interest rates by raising fees instead, effectively lowering deposit rates below zero -- a topic the authors do address (hat tip to a student).

Perhaps banks did not lower their deposit rates below zero, not because there is no cost to holding cash, but because they didn't know how depositors would react, or believed the policy was temporary, and were afraid of a hysteretic effect on depositors, or due to ongoing concerns with their quantities of bad long-term loans. It could also be the case that holding small amounts of cash is relatively costless, but once you have football fields of cash, suddenly you need to hire top-notch security, and buy insurance, so the cost could increase non-linearly. The authors, once again, should be commended for being explicit that this assumption would alter the conclusions of the paper. Yet, even I suspect there is a limit to the cost of hoarding cash.

I could go on here with theory. This is a one period model. A negative headline rate probably sends a stronger signal about future low short-term rates (commitment to irresponsibility) than keeping a rate at zero, and thus could influence longer maturities (as evidence finds). They could also underscore a central bank's commitment to do "whatever it takes" to achieve inflation. It's also a closed economy -- negative interest rates could trigger capital outflows and a depreciated exchange rate, particularly if it had an impact on the yield curve.

It's also possible to introduce other factors which would imply negative nominal rates are expansionary. See this nice paper by Davide Porcellacchia (who we tried unsuccessfully to hire last year at NES), which argues that negative rates might still lead consumers to save less overall.

Thus, theoretically, the result is ambiguous. (Isn't that always the case?) Thus, it comes down to empirics.

I also had some minor quibbles with the empirics in the paper. At one point, they write, speaking of Denmark, that "the negative policy rate has not been transmitted to deposit rates." It actually looks to my eye like there were slight declines in the deposit rates each time the Danish central bank crossed into negative territory. The household deposit rate was cut roughly in half after the second cut in 2014. If you squint, it also looks like the corporate deposit rate dipped below zero at several points. 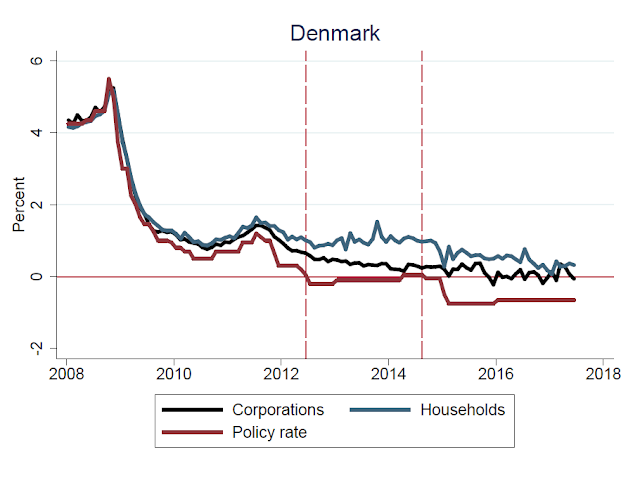 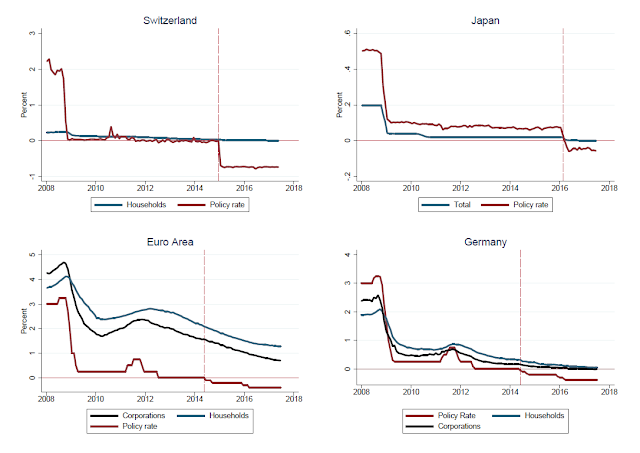 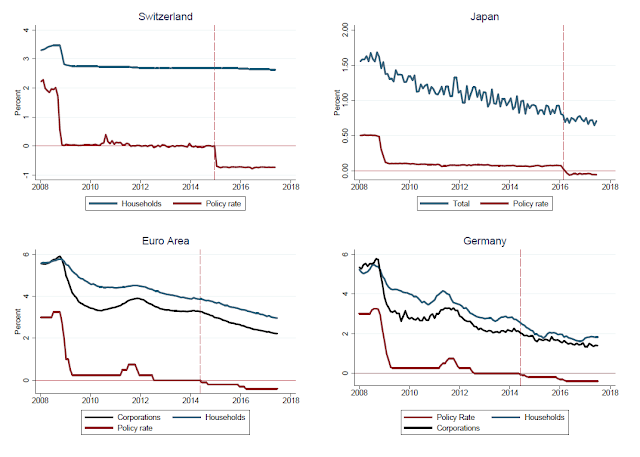 It would also have been nice to look at surprise announcements of ZLB episodes, and look at how the announcement of negative rates affect a variety of interest rates in the economy, including the rates that banks borrow from each other at, longer-term yields, and also of exchange rates and the stock market (admittedly, from what I've seen, this evidence looks mixed). The BIS found that negative interest rates passed through fully into money markets. Switzerland and Denmark did, after all, institute negative rates in part to stabilize the exchange rates.

I think more work needs to be done on this topic, but from the theory and the data, I don't see much that suggests that negative interest rates can't or didn't stimulate the economy. I am persuaded that negative reserve rates are best complemented with other policies, and I credit this paper with making the point. I believe central banks should do more to boost lending during liquidity trap periods, such as through a full program of quantitative targeting of loan levels, regulation, fines, negative interest rates, or subsidies for loans made. China in fact was said to do quantitative targeting during the Great Recession, and France and Germany did things like this during the Bretton Woods period. (See this nice paper by Eric Monnet.)

Overall, I'm a big believer of much more aggressive monetary policy at the zero lower bound than what we've seen. While I think a healthy degree of skepticism about new policy tools during liquidity trap periods is prudent (probably, mistakes were made with the rollout and PR around QE, even if it does seem to have been stimulative), and while I also think papers like this one move the debate forward, I've also long been skeptical of the skepticism of the idea that monetary policy can't be effective at the ZLB. I worry that this paper may be misinterpreted to suggest that banks shouldn't try to use negative interest rates at the ZLB, and should opt to do nothing instead. This despite the correct conclusion being that central banks should use negative reserve rates in conjunction with other policies. Some like this happened with people who read Paul Krugman only occasionally, but not in the round. They walked away believing that monetary policy had "shot its wad" -- in the words of a former president. Had they read every word Krugman wrote, they would have believed instead that central banks needed to credibly commit to higher future levels of inflation to stimulate the economy, but only that traditional monetary policy was ineffective. I observed this when I worked in the Obama CEA, and some economists there too believed that nothing more could be done on monetary policy, leading them to not want to recommend to the President that he make his vacant FOMC picks. There's a case to be made that this was the single biggest policy mistake Obama made while in office. And that mistake, to a large extent, explains how we got to where we are.

Note: I should mention that many of the points above were motivated, directly or indirectly, by the insightful referee reports of my students!

Posted by Doug Campbell at 7:48 AM